Try This Trick If You're Having Trouble with Meditation...

Photo by Jesse Bowser on Unsplash

This one was a game changer for me.

I had been “trying” to meditate for a long time, sitting down, closing my eyes, settling into the silence within me, then suddenly the brain chatter would get louder.

I’d try to stop the chatter, ending thoughts as they came in and looking for the silence beyond the words, grasping onto it with the edges of my fingernails like my sanity depended on it. A few seconds of silence would surpass, then my frail grasp would slip and words would come back. Annoying words. Stressful words. Funny words. Narratives about my day. My to-do list for tomorrow. What I was going to do after I meditated. Stupid disruptive words.

Frustrated, I quit. The next time I meditated, the same thing would happen, I’d settle into a comfortable seat, close my eyes, and the thought train would come blasting through my awareness, sometimes to the extent that I would end the meditation to go complete something on my to-do list that, for whatever reason, could not wait.

One bitter January some years back after completing massage school, my mom took me to Palm Springs to a destination spa she had been frequenting for nearly 30 years. In addition to the massages, body treatments, and facials, they also had services like Reiki and Shamanic healing sessions, and classes throughout the days and evenings on meditation, yoga, angelic card readings, and so on.

(Here's a random picture from said trip, for the kicks)... 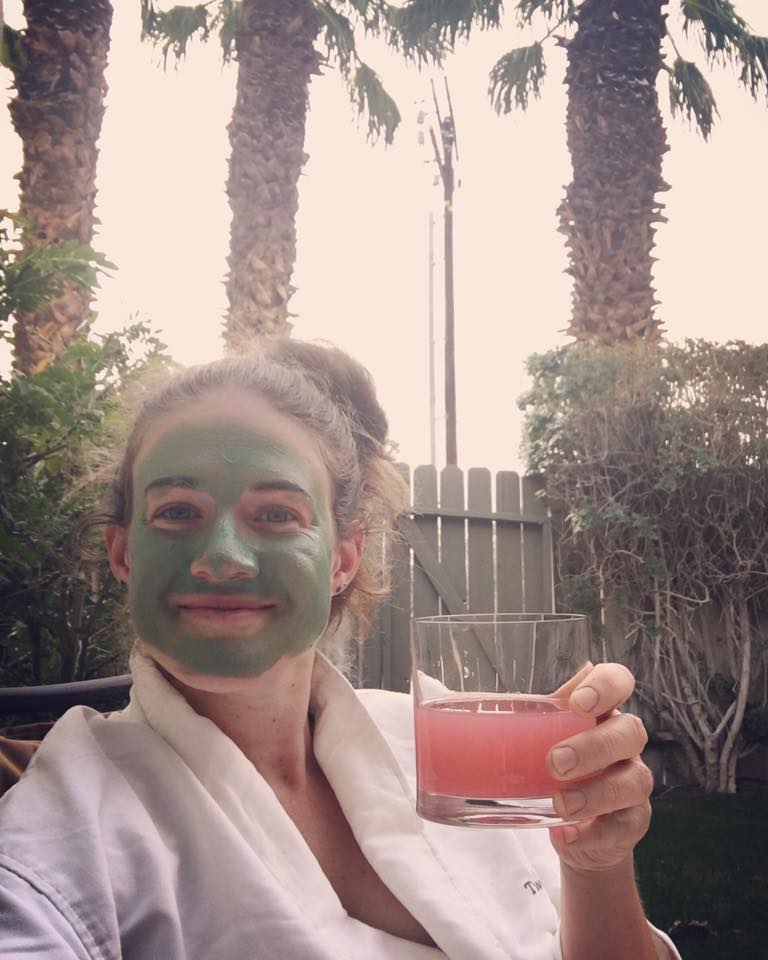 Excited to dive into all this place had to offer, I attended a meditation class.

The teacher was an older gentleman who had studied Zen for years, meditated in temples in Asia for days and weeks, and come back state-side to make a career of teaching meditation.

I settled into the class with about four other guests. After brief introductions, we got started.

He told us something that changed the trajectory of my meditation practice to this day.

He told a story about a temple guard in ancient China that sat outside the gates simply observing. His focus never followed any particular person or thing, he just gazed out in a knowing awareness, observing all that was going on around him.

“Think of the visitors to this temple as your thoughts,” he said. “The guard didn’t stop them from moving around, taking pictures, chattering, he only observed. Instead of trying to stop your thoughts, I want you to just observe them.”

Up until this point, I had pictured meditation as sitting in absolute mental silence, all thoughts halted and nothing but an empty ring in my head.

The struggle I was facing was that I was trying to stop my thoughts.

Your brain is a reflexive organ that has somewhere around 60,000 thoughts per day, most of which are just repeats from the day before. Trying to stop that would be like trying to stop a train with a fallen branch.

Of course, you can’t stop that.

So in this particular meditation, I practiced observing my thoughts for the first time.

“As thoughts come in,” the teacher said, “just observe them, and let them pass. Don’t judge them. Bring your awareness gently back to your breath.”

As the meditation went on, my usual thought train came in with its cargo load of judgments and sequels of yesterday, but this time, instead of resisting it, I let the thoughts pass.

By the end of the meditation, I felt what it was like to be in a trance-like state from meditation. My awareness stayed with my breath, and thoughts were just wisps of vapor, appearing and disappearing, that I let pass without judgment.

When my own awareness would begin to get carried away with a thought or even judgment of thought, I’d gently bring it back to my breathing, not coming down on myself for it. Distractions happen, I’d tell myself.

If you’re struggling with beginning a meditation practice, try this technique next time.

Don’t try to stop your thoughts (it's impossible anyway), just observe them as they come in and out. Label your thoughts, but don’t judge them.

Labels I give my thoughts are one-word things like fear, analyzing, explaining, planning, and reflecting. When I can label a thought, say if something from yesterday comes up that I can label “reflecting,” I realize what it is: My brain just reflecting on yesterday.

Then, it can pass.